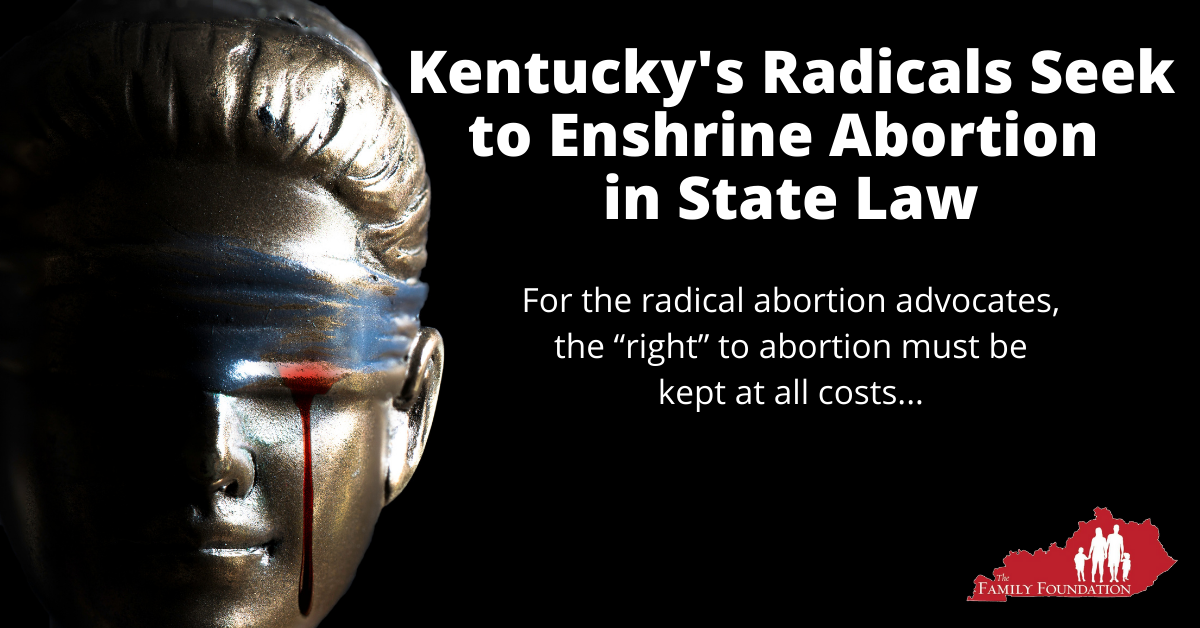 For the radical abortion advocates, the “right” to abortion must be kept at all costs—regardless of how wrongly Roe v. Wade was decided, despite the scientific and medical developments, and with no concern for the over 62 million lives it has ended.

But Roe v. Wade has been widely criticized as wrongly decided since the error was made in 1973 and the U.S. Supreme Court is set to reexamine it in December, when they hear oral arguments in Dobbs v. Jackson Women’s Health Organization. A decision is expected next summer.

These radical abortion advocates fear that the U.S. Supreme Court may acknowledge that Roe v. Wade was filled with errors, unjustly decided, and should be overturned. Thus, radical Democrat lawmakers from Louisville (Representatives Mary Lou Marzian and Lisa Willner) have pre-filed a bill for Kentucky’s upcoming legislative session in January 2022 that would enshrine the wrong of Roe v. Wade into our state law.

Never mind that we should NOT be governed by an unjust legal standard that has proven unworkable, inflicted significant damage, is based on outdated science and societal standards, and is not widely relied upon.

Further exemplifying how out of touch these radical abortion advocates are with reality, the Willner (D-Louisville) refused to accept the medical and scientific fact that only a woman can be pregnant—instead, using the term “pregnant person.”

The Democrat lawmakers that pre-filed legislation to ensure a continued “right” to kill preborn human beings also lamented the fact that a pro-life Texas law recently went into effect, saving the lives of 150 preborn humans daily.

With more than 62 million lives lost since abortion was “legalized” in 1973, it is past time for our nation’s High Court to correct the injustice of Roe and put a stop to its ongoing consequence. After all, as The Family Foundation’s brief argues, the right to life is the most fundamental right given by God and has long been recognized in common law and is protected by the 9th Amendment of the Constitution.

Abortion advocates have revealed their extremism and left no doubt that they will do anything to have the right to kill a preborn human. Therefore, it is all the more important that Kentucky’s pro-life voters get to the polls and vote “Yes for Life” on Kentucky’s proposed Pro-Life Constitutional Amendment in November 2022.

The amendment would protect the Commonwealth’s pro-life laws by ensuring an activist state judge can’t make the same error that the U.S. Supreme Court did in Roe v. Wade by declaring a constitutional right to abortion.