Is this the case pro-life advocates have been waiting for? 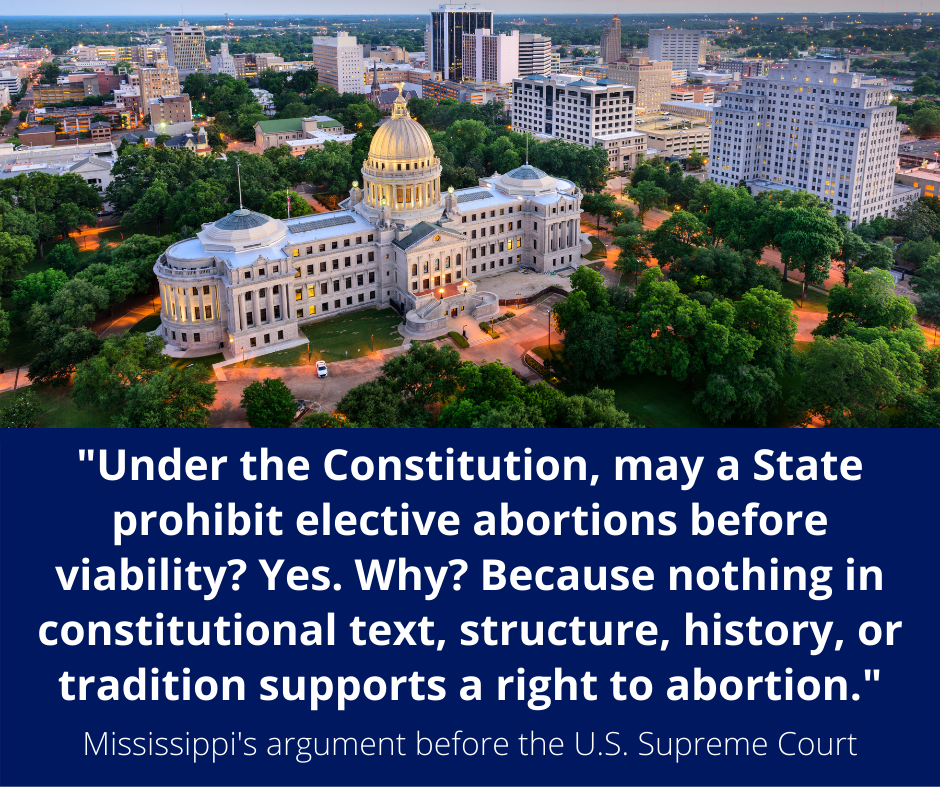 Mississippi filed its brief on July 22, and the opening paragraph makes clear it is arguing strongly to overturn the landmark abortion cases, Roe v. Wade and Planned Parenthood of Southeastern Pennsylvania v. Casey.

On a sound understanding of the Constitution, the answer to the question presented in this case is clear and the path to that answer is straight. Under the Constitution, may a State prohibit elective abortions before viability? Yes. Why? Because nothing in constitutional text, structure, history, or tradition supports a right to abortion. A prohibition on elective abortions is therefore constitutional if it satisfies the rational-basis review that applies to all laws.

For nearly 50 years, the U.S. Supreme Court’s pro-abortion decisions in Roe and Casey have embroiled the Judiciary in a contested policy matter that it can never resolve. But the Court is finally revisiting the issue.

It’s an opportunity for the nation’s highest court to address and clarify the scope of the people’s authority, through the States, to address the controversial issue of abortion.

The past several decades show that the courts cannot solve the abortion issue. Roe and Casey have walled off too many solutions, shackling the States to facts that are decades out of date and leading to millions of lives lost—despite science and society marching forward.

Roe suggested that the absence of abortion would mean unwanted children would force upon women “a distressful life and future.” Numerous laws enacted since then have addressed pregnancy discrimination, required leave time, assisted with childcare, and made other changes allowing women more options for pursuing both career success and a rich family life.

Additionally, every state and Washington, D.C. have “safe haven” laws allowing women to safely leave unwanted newborns directly in the care of the state until the baby can be adopted.

The nation’s fever pitch debate on abortion can only be resolved when the Court returns abortion policy to the States—where agreement is more common, compromise is often possible, and disagreement can be resolved at the ballot box.

A sound view of the Constitution makes clear that a State law restricting abortion is valid if it satisfies the rational-basis review that applies to all laws. Laws like Mississippi’s reasonably further important state interests like protecting unborn life, women’s health, and the medical profession’s integrity.

If the Court insists on being the authority on the abortion issue, rather than giving it to the States, it should at least revisit the guidepost it uses to determine when a state has an interest in restricting abortion.

Current precedent relies on viability, when the unborn child is capable of surviving outside the womb. But viability erects an arbitrary line that produces arbitrary results.

Medical and scientific advances show us that an unborn child has “taken on the human form in all relevant respects” much earlier than previously known, and knowledge has progressed on when the unborn child is sensitive to pain.

Many states, including Kentucky, have passed laws attempting to protect the sacred right to life recognized and guaranteed in our constitutions—including a record 90+ pro-life laws in 2021, alone.

Yet, the Court’s outdated and wrongly decided cases are interfering with the States’ responsibility of protecting the right to life of their citizens.

This case will put the spotlight of 60+ million deaths on the Court’s justices, especially its three newest members. Will this be the case that pro-life advocates have spent decades daring to hope, pray, and work towards… the one that finally saves the unborn?