An Open Rebuke is Better than Silent Love: Why I Must Call Him “Abortion Andy”

An Open Letter from Kent Ostrander, Executive Director of The Family Foundation 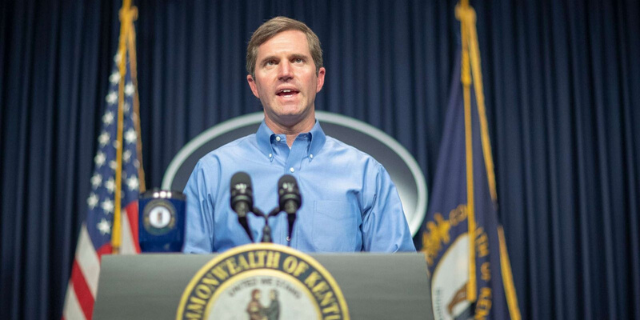 “Better is open rebuke than love that is concealed. Faithful are the wounds of a friend.”  – Proverbs 27:5-6a  ESV

Jesus openly and forcefully labeled the religious rulers of His time (the Pharisees, the scribes and the Sadducees) as “whitewashed sepulchers,” “brood of vipers,” and “hypocrites.” 1 I think we would all agree that it was NOT because He was trying to “be mean” or that He had an anger problem, but rather to confront them with THE TRUTH in such a way that they might “awaken” from their deception – from their spiritual slumber.  (Clearly, Jesus spoke out against angry and vicious name-calling.2)

Would Jesus’ words have hurt their feelings?  Yes.

Because they were hurt, would they have become angry?  Would they retaliate? Yes . . . and they did!

Were these “nice” things to say?  No.  They were forceful and strong . . . but they were the truth about how the Heavenly Father regarded their form of “righteousness.”

In reality, these leaders were beautifully dressed on the outside with splendid vestments, as well as their outward sanctimonious posture of “righteousness,” but their religiosity engendered nothing but spiritual death on the inside. Thus, they were whitewashed tombs – external beauty, death inside.

Jesus said the same truth another way, affirming they had a form of religion, but that form poisoned others who would follow their lead. Hence, they were a “brood of vipers.” 3

Here we are in 2020, in the midst of COVID-19. Our Governor, Andy Beshear, has passionately articulated his care for all who reside in Kentucky . . . except for those inside of the womb.  Though some question his motives and suggest political grandstanding, let’s not go there. Let’s believe the best about our Governor.

But here is the problem: He has care for the born and, at the same time, has absolutely no regard for those preborn. How can I make that claim? Consider these facts:

I.        He vetoed Senate Bill 9, the “Born Alive Infant Protection Act.” This bill guaranteed that a newborn child would receive medical care, even if he/she was born alive as the result of a botched abortion. The Governor wrote in his April 24 veto proclamation: “I am vetoing Senate Bill 9 because existing Kentucky law already fully protects children from being denied life-saving care and treatment when they are born.” But that is not really true.  Yes, Kentucky Law says a born alive infant “shall be fully recognized as a human person,” but then turns the force of that statement to require that a birth certificate, and then, if the child were to die, a death certificate, must be given. It does NOT MANDATE that medical care be given. Some MAY INFER that birth and term “human person” means the baby MUST BE GIVEN medical care . . . but it doesn’t. Look at the other end of life: a living human being may be given a “Do Not Resuscitate” order by their medical surrogate, which basically means, “Allow them to die.” So, a mother could easily encourage the abortion staff to “Allow the child to lay unattended until he/she passes away” – exactly like Virginia’s pro-choice Governor (and medical doctor) has proposed.

Even IF a pro-life judge would rule that existing law requires medical care be given, a pro-choice judge wouldn’t. And more, if that legal intent is already in the law, what harm is there in allowing Senate Bill 9 to become law and “spelling it out” that medical care MUST be given? That is commonly done by the legislature!  Bluntly, Gov. Beshear vetoed Senate Bill 9, and in an attempt to justify his veto, he misrepresented the truth to Kentucky citizens.

II.        Gov. Beshear also said in his veto proclamation that “bills similar to Senate Bill 9 have been struck down as unconstitutional in the majority of states in America when challenged.”  What is he talking about???  What bills have been stricken?  He MAY be saying that when Attorney Generals have stood up against their Governors on abortion clinics being open during COVID-19, MOST have not prevailed.  That is true. But no pieces of legislation similar to Senate Bill 9 have been overturned. FACT: It’s the legislature’s job to legislate . . . and legislating is not unconstitutional. It is the legislature’s prerogative!  Again, at best Gov. Beshear offered only a half-truth.

III.        By vetoing Senate Bill 9, Gov. Beshear also vetoed the amendment to it that expanded authority for the Attorney General to investigate the abortion industry. This is particularly important because two University of Louisville School of Medicine professors have testified under oath that they PERFORM ALL of the surgical abortions at the Louisville abortion clinic.  (The owner of the clinic, too old and too frail to do surgeries, now only does the medicinal abortions. But why are U of L School of Medicine professors doing them?)  Shouldn’t the Attorney General be able to investigate the clinic’s cozy relationship with U of L, particularly since Kentucky Law [KRS 311:715 (1] requires that “Public agency funds shall not be used for the purpose of obtaining an abortion or paying for the performance of an abortion”?

By the way, one of the two professors testified “I was hired, you know, by the University of Louisville in order to provide not only general obstetric and gynecological care but also to, you know, fulfill this family planning position and provide abortion services. But, you know, I guess it’s sort of I guess like a joint endeavor, I guess.  You know, that – I consider it part of my – part of my job.  That’s what the University of Louisville hired me to do.”  Is this state university paying for abortions in some way?  Shouldn’t the Attorney General have the power to investigate thoroughly.

IV.        During the beginning of the COVID-19 crisis, Gov. Beshear required all non-essential medical procedures be suspended and medical offices closed. This meant that many heart surgeries, cancer surgeries, and treatments that were not considered “essential” to life HAD TO BE DELAYED. The goal was to save Personal Protective Equipment (PPE) for medical workers treating the virus.  BUT . . . when inquiries were made, on several different occasions, staff at the abortion clinic reported that the Governor had allowed them to remain open.  This was particularly complicating because the Governor repeatedly asked for donations of PPE on his daily afternoon COVID-19 reports, while PPE was being used by the abortionists and their aides.

And, with similar preferential treatment, officials in the Beshear Administration allowed the clinic to break other rules imposed on everyone else – 1) no six-foot social distancing, 2) large groups of patients (more than 10) and their friends/family being grouped in the small waiting room, 3) and out of state patients being driven into Louisville to the clinic and then driven home, etc. The abortion clinic has been given special privileges not available to other medical clinics and personnel. (By the way, the clinic’s owner and his wife both maxed their giving to Gov. Beshear’s campaign last year.)

V.        Gov. Beshear authorized the Planned Parenthood in Louisville to start doing abortions and they began in late March — DURING THE COVID-19 CRISIS. Heart surgeries and cancer treatments are postponed and yet the Governor authorizes a new abortion clinic to open?  What kind of leadership is this?

VI.        By authorizing an abortion license for Planned Parenthood (PP) in Louisville, he has allowed the notorious Dr. Deborah Nucatola to begin having influence in Kentucky. What influence? We don’t know exactly . . . but she is the one who was caught on video talking about being careful as to how to abort an unborn child in a way that she could protect the vital organs to allow her to illegally harvest and sell them for research.  Now, Dr. Nucatola is the Medical Director for “Planned Parenthood of Indiana and Kentucky.” (Because Kentucky’s PP was doing poorly, it merged with PP of Indiana, and most recently with PP of the Great Northwest, allowing West Coast power, money and influence to target Indiana and Kentucky.)

VII.      Gov. Andy Beshear came by his position supporting abortion honestly: His parents have been strong supporters of Planned Parenthood for decades. In fact, after being Attorney General (1980-83) and then Lt. Governor (1983-1987), Steve Beshear lost his 1987 bid for Governor primarily because his ardent support of Planned Parenthood was revealed to the public.  In Kentucky, back in the 1980s, many Democrats were still pro-life. When he ran for Governor in 2007, he didn’t mention his pro-abortion or pro-Planned Parenthood bent.  So, our current Governor, young Beshear, is simply leading in the only direction he has ever known – with a pro-choice/pro-abortion resolve.

All of this is magnified by Gov. Beshear’s focus on saving lives from COVID-19, while totally authorizing abortion at full speed ahead. The magnitude of life lost is staggering. Using the Governor’s own “Age of Death Chart” from COVID-19 and assuming a 90-year life span, to date – since March 1 – the 376 victims amass a total of 5,010 of “years of life” lost. But over the same time period, because if Gov. Beshear’s pro-abortion policy, the 970 abortions total 87,300 “years of life” lost.  Almost 90,000 years of life lost!  (Note: These calculations were done using only the COVID-19 and abortion numbers from March 1 through May 20.)

Please note that this is NOT an “anti-Beshear election polemic” – he is not due to run for re-election for three years.  It is NOT a “sully his name” strategy – in fact, many are pleased that he is first and foremost FOR abortion, so calling him “Abortion Andy” would be a badge of honor in those circles. And, it is NOT an “angry outburst” trying to “get even” with a leader who has hurt the feelings of pro-life citizens. We are all commanded to respect those in authority and at the same time, speak the truth.  And, this is simply the truth.  It is the truth by virtue of what Gov. Beshear has actually done, as outlined above—It is the truth by virtue of the fruit of his life.

Stepping back from the details and considering the full picture, it is important to recognize that Jesus’ firm handling of the Pharisees, scribes and Sadducees actually “worked” – it made an impact and it changed the world, at least for some.  Nicodemus came to him for counsel, albeit by night, and, from their interaction, we all understand more clearly the need to be “born again.” 4 Thank you, Nicodemus!  And it worked also with Joseph of Arimathea.5

Pray for Gov. Andy Beshear – we’re commanded to do so.6  (I do and will continue to do so daily.)  But until he turns on the abortion issue . . . until he repents and sets his new course in a “life direction,” he will be “Abortion Andy” to me,  . . . and I hope to all who see him clearly. For his sake, for Kentucky’s sake, and for the sake of all the children poised to come into this world, let him be known as “Abortion Andy” in order that he may pause, consider and turn from the path he has set for himself.

Understand that using a name such as “Abortion Andy” is Biblical.  It is true. And, most importantly, it may make a difference in Gov. Beshear’s life.  Ask Nicodemus or Joseph of Arimathea.

← Memorial Day: Remembering the Fallen Who Defended Against All Enemies The Echo Chamber of Commerce →