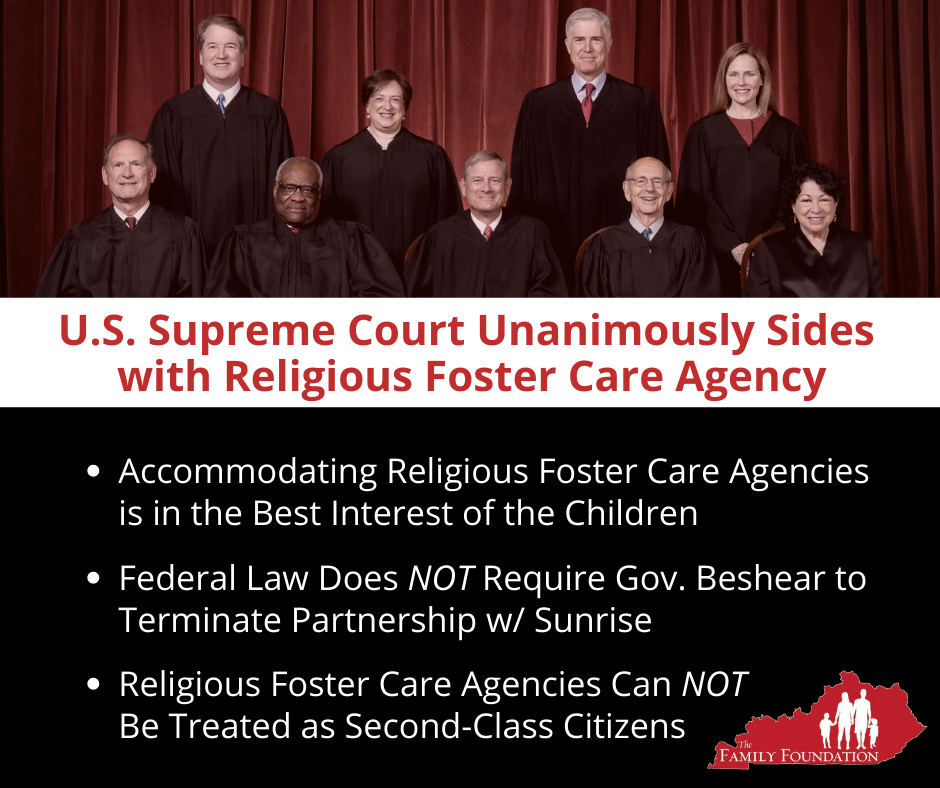 In a major decision, the U.S. Supreme Court has protected the religious liberty of Catholic Social Services (CSS) in Philadelphia — a unanimous 9-0 decision!

We hope the following is helpful in understanding the implications for Kentucky and the Governor’s ongoing attack against religious liberty.

Here are three major takeaways for the dispute in Kentucky:

1) Accommodating Religious Foster Care Agencies in Best Interest of the Children
The real winners of today’s decision, and any victory with Kentucky’s Sunrise Children’s Services, are the children.

As the nation’s highest court recognized, “including [Catholic Social Services] in the program seems likely to increase, not reduce, the number of available forster parents.” Thus, state partnership with religious foster care agencies furthers the state’s important goal of “[m]aximizing the number of foster families.”

It is time for Governor Beshear to put Kentucky’s vulnerable children above politics and allow Sunrise to continue serving them.

2) Federal Law Does NOT Require Beshear to Terminate Partnership w/ Sunrise
Today’s unanimous decision proves the falsehood of Beshear’s claims that federal law tied his hands, making him unable to offer an accommodation to Sunrise Children’s Services — like that offered by previous Republican and Democrat Governors, including his father.

The choice is Beshear’s and he, alone, is responsible for the ultimatum threatening to take away the services being provided to nearly 1,000 children.

3) Religious Foster Care Agencies Can NOT Be Treated as Second-Class Citizens
The Court, including the most liberal justices, clearly recognized that Philadelphia’s decision to exclude religious service providers from its foster care system could NOT pass the Court’s strict scrutiny. After all, “so long as the government can achieve its interests in a manner that does not burden religion, it must do so.”

Beshear should take notice and ensure that he does not continue to treat religious institutions as second-class citizens.

In the meantime, join thousands of fellow Kentuckians in standing up for Sunrise and religious liberty–sign the petition: https://www.kentuckyfamily.org/index.php/sunrisepetition/