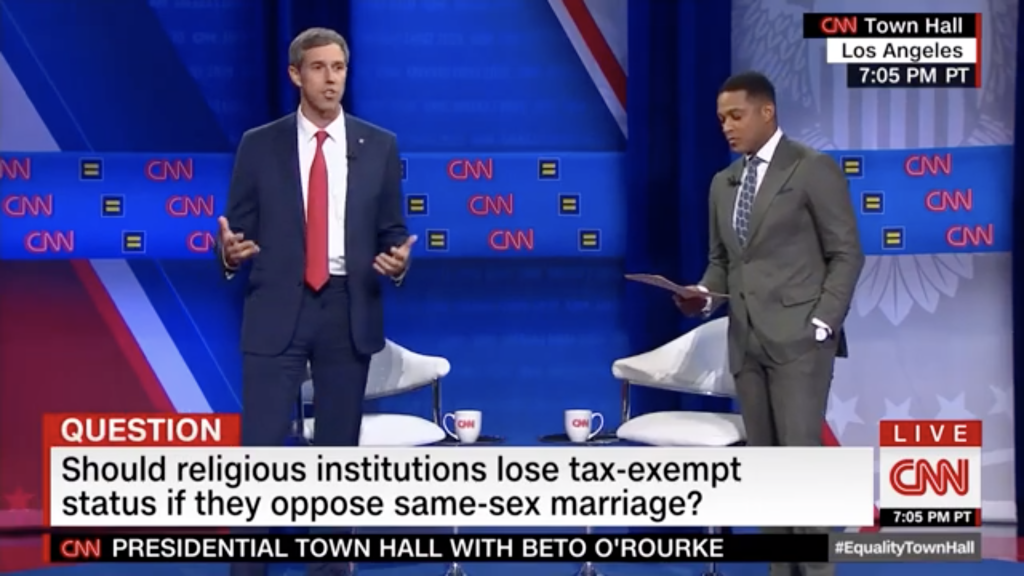 The former Texas congressman made clear that “There can be no reward, no benefit, no tax break, for anyone, or any institution, any organization in America that denies the full human rights and the full civil rights of every single one of us.” He went on to promise that “As president, we’re going to make that a priority…”

Another Democratic presidential hopeful, Sen. Cory Booker (D-N.J.), also responded to the question. He refused to give a “yes” or “no”, but made clear that “if you are using your position to try to discriminate [against] others, there must be consequences to that. And I will make sure to hold them accountable using the DOJ…”

So much for being progressive! As U.S. Supreme Court Justice Kennedy, the author of the court opinion legalizing same-sex marriage, warned last year in Janus v. AFSCME: “…it is not forward thinking to force individuals to be an instrument for fostering public adherence to an ideological point of view they find unacceptable.” Kennedy went on to explain that “It is forward thinking… to preserve and teach the necessity of freedom of speech for the generations to come…”

In fact, these statements from Democratic presidential hopefuls reflect “a clear and impermissible hostility” toward what the U.S. Supreme Court recognized as “decent and honorable religious or philosophical premises” to a position held “in good faith by reasonable and sincere people here and throughout the world.”

The U.S. Supreme Court, in a 7-2 decision, strongly condemned such hostility just last year when it declared that “the government, if it is to respect the Constitution’s guarantee of free exercise, cannot impose regulations that are hostile to the religious beliefs of affected citizens and cannot act in a manner that passes judgment upon or presupposes the illegitimacy of religious beliefs and practices.”

Not to mention that these Democratic presidential hopefuls are ignoring the very court opinion that legalized same-sex marriage. The justices in Obergefell “emphasized that religions, and those who adhere to religious doctrines, may continue to advo­cate with utmost, sincere conviction that, by divine pre­cepts, same-sex marriage should not be condoned. The First Amendment ensures that religious organizations and persons are given proper protection…”

If these Democratic presidential hopefuls are truly interested in protecting “the full human rights and the full civil rights of every single one of us,” perhaps they should start by actually respecting the “constitutional right of free expression” and America’s “belief that no other approach would comport with the premise of individual dignity and choice upon which our political system rests.” See Leathers v. Medlock. Otherwise, such rhetoric rings hollow.

It is a sad day when presidential hopefuls within one of our nation’s main political parties publicly advocate for such “clear and impermissible hostility” toward the “decent and honorable” views of their fellow citizens, disregard the warnings of the U.S. Supreme Court, and attack the “individual dignity and choice upon which our political system rests.”

It’s no longer just about so-called “fairness” ordinances threatening the free speech of t-shirt makers and wedding cake artists, or the religious liberty of those who offer wedding venues. It’s now about pastors, churches, and religious organizations that could be forced by government to do or believe things their Faith says is wrong.