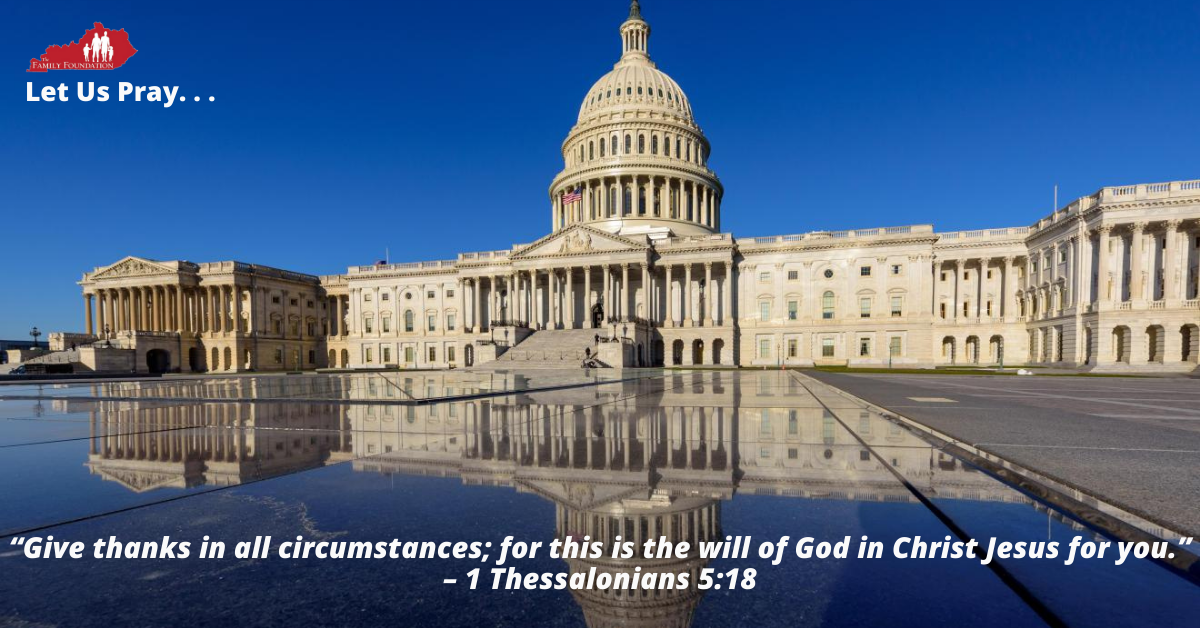 “Give thanks in all circumstances; for this is the will of God in Christ Jesus for you.” – 1 Thessalonians 5:18

Last week, The Family Foundation hosted a legislative briefing where a multitude of potential bills were discussed for Kentucky’s upcoming 2022 legislative session. Matt Sharp, who serves as senior counsel and state government relations national director with Alliance Defending Freedom, updated legislators on several important pro-family bills that have passed in other states across the nation.

The proposed legislation addressed a wide range of issues such as, the “Save Women’s Sports Act” which protects women sports by prohibiting biological males from competing in them; and the “Help Not Harm Act” which bans puberty blockers, cross-sex hormones, and sex reassignment surgery on minors.

Information was also shared on the “Parents Bill of Rights” which defines the right of parents to make critical decisions for their child and balances those rights with the government’s interest; and the “Transparency in Education Act” which allows parents to opt their children out of any lessons that are objectionable such as, CRT and sex-education lessons. There were other pro-family bills presented as well in addition to these.

The Family Foundation is thankful for the many legislators from across the Commonwealth who attended this event to consider the needed steps forward to continue protecting Kentucky families and the Biblical values that make them strong. We are thankful for the legislators that God has chosen to raise up here in Kentucky, and we consider it a high honor to work with them in the realm of public policy.

We look forward to the upcoming legislative session in hopes of a General Assembly where God is honored and glorified.

LET US PRAY . . .
Father, we pray for every legislator in Kentucky to have Your wisdom as we know You are the One who has placed them in their position of authority. Father, thank You, for legislators who are willing to work with us at The Family Foundation to protect Your creation of the family. Father, we pray for an upcoming legislative session that is honoring to You. Help each one of us to be the salt and light You have called us to be. In Jesus’ Name, Amen.