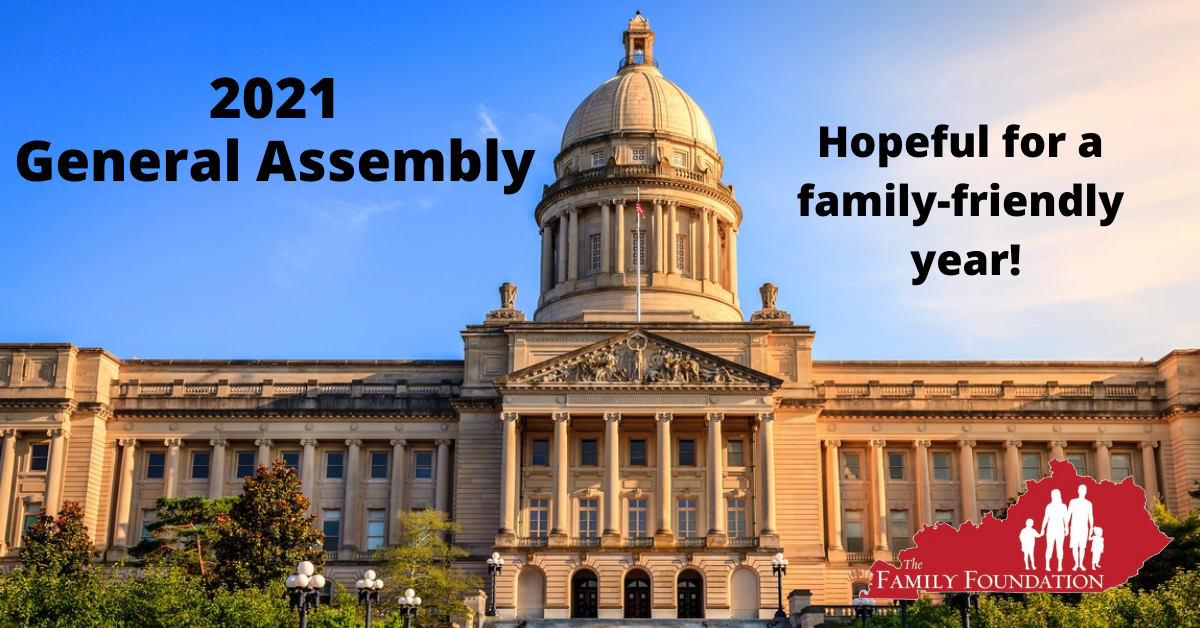 Despite the 2020 General Election being impacted by COVID-19, a record 2.1 million Kentuckians case votes and a large number of candidates who campaigned on traditional family values were elected.

For the first time, the Commonwealth had early voting and made absentee voting available to all voting Kentuckians. These options were implemented to mitigate COVID-19 restrictions and concerns. At least some bipartisan support exists for the General Assembly to make these options permanent.

Voter turnout, at 59.4 percent, was consistent with the last two presidential election years.

A representative democracy depends not just on voter participation, but also voter education. The Family Foundation, since 1993, has managed the Kentucky Candidate Information Survey to help inform voters of where candidates stand on the issues, in their own words.

The Family Foundation’s public policy work primarily focuses on the Kentucky General Assembly and this election’s implications are most evident in the House.

Of the 100 seats in the House, 67 of them were contested. 40 of the winning candidates staked out their positions on important family value issues.

A glance at candidates’ survey responses reveals that many family-friendly state representatives were elected.

39 elected state representatives took a stand for religious liberty, agreeing that “Churches and religious groups must be protected from state discrimination on the basis of their beliefs about marriage and sexuality” AND “Personal and creative service businesses should not be forced to produce goods or services that violate their rights of conscience.”

35 of them also disagreed that “The legislature should pass a statewide ‘Fairness Ordinance.’” Such ordinances have been used to persecute Christians who oppose same-sex marriage for religious reasons.

39 elected state representatives stood up for the Title IX rights of women, agreeing that “In Kentucky schools, women should compete against biological women (not biological men who identify as women) in athletic contests.”

39 elected state representatives desire to protect our children, disagreeing that “Public schools should allow students to use bathrooms and locker rooms in accordance with their chosen gender identity.”

35 of them also agreed that “Because they leave children sterile for life, transgender surgeries and hormone treatments on minors should be banned.”

38 elected state representatives also took pro-family positions by disagreeing with the following statements: “To reduce teen pregnancies, minors should have access to contraception without parental knowledge.” and  “Kentucky should legalize recreational marijuana.”

Republicans have a supermajority in both chambers of the Kentucky General Assembly, the House (75-25) and Senate (30-8). That means 76 percent of state legislators are Republican.

Practically speaking, no bill can be passed into law without significant Republican support. Republicans determine the leadership, rules, committee assignments, and the agenda of each chamber.

Generally, the party in control never brings a bill up for debate or a vote unless a majority of their caucus (their members in the chamber) support it. That means a bill doesn’t just need a majority of votes to become law, it needs the right votes—a majority of Republican votes.

For example—all Democrats and only 26 Republicans give you a majority in the House. But that is 12 votes short of the 38 Republican votes you likely need to ensure a bill is heard and receives a vote.

“The election of so many family-friendly legislators means there is a lot of potential for the 2021 Session,” explained Michael Johnson, policy analyst for The Family Foundation. “In the midst of a pandemic that has interrupted the status quo and ground normal routines to a halt, Kentuckians went to the polls and gave their elected officials a mandate—protect and promote the family.”

But Johnson cautioned, “Legislators already face pressure to expand gambling and legalize marijuana. Intense pressure will also be applied to convince them to ‘play it safe’ and ‘maintain the status quo,’ rather than fulfill campaign promises.”

A State Supreme Court justice who appears to believe in the rule of law was also elected.

Justice-elect Bob Conley’s understands the rule of law as: “Regardless of the parties involved in a case, the judge’s rulings should be fair, consistent, and based upon the law and prior case law on point. It is the legislature that makes law changes in accordance with social ideals, as long as they don’t conflict with the Constitution.”

His responses to the Kentucky Candidate Information Survey emphasized that the Constitution “should not be reinterpreted” and “should only be interpreted as the framers intended.”

← The Family Foundation files response to KHRC and Tracks Illegal slot parlors now have to close their doors, says group →
Please follow and like us: