COVID-19 Has Morphed into a Battle Over Abortion

As many states, including Kentucky, are fighting to “flatten the curve” and many companies are voluntarily repurposing themselves to provide personal protective equipment, which is still in short supply, a secondary battle has erupted.

Hint: it involves abortion clinics using the crisis to gain an advantage.

Nearly every state in the United States has issued an order temporarily halting elective medical and dental procedures – taking the moral position that those on the frontlines fighting COVID-19 should have access to equipment designed to protect them from illness before anyone else should have access to it.

And nearly every clinic in the nation has complied with those orders – except for abortion clinics, who have used this health crisis as an opportunity to prove to the world that they should be allowed to continue operating because they are “essential” (despite the fact that more than 98% percent of abortions are not medically necessary).

Several clinics have already run into courts to find sympathetic judges who will let them keep the doors open, despite creating huge problems for hospitals and clinics looking for personal protective equipment, and emergency rooms who are already overburdened with patients.

Now, we’re seeing a group of leftist attorneys general working to use the COVID-19 distancing mandates as a way to push remote abortions through the states’ existing telemedicine channels. Remote abortions are extremely dangerous because they involve a patient consuming dangerous substances to induce an abortion away from direct supervision of a physician.

As of April 8th, our sources at the abortion clinic in Louisville – the state’s only abortion clinic – have observed at least 452 abortions inside Kentucky since March 1st. 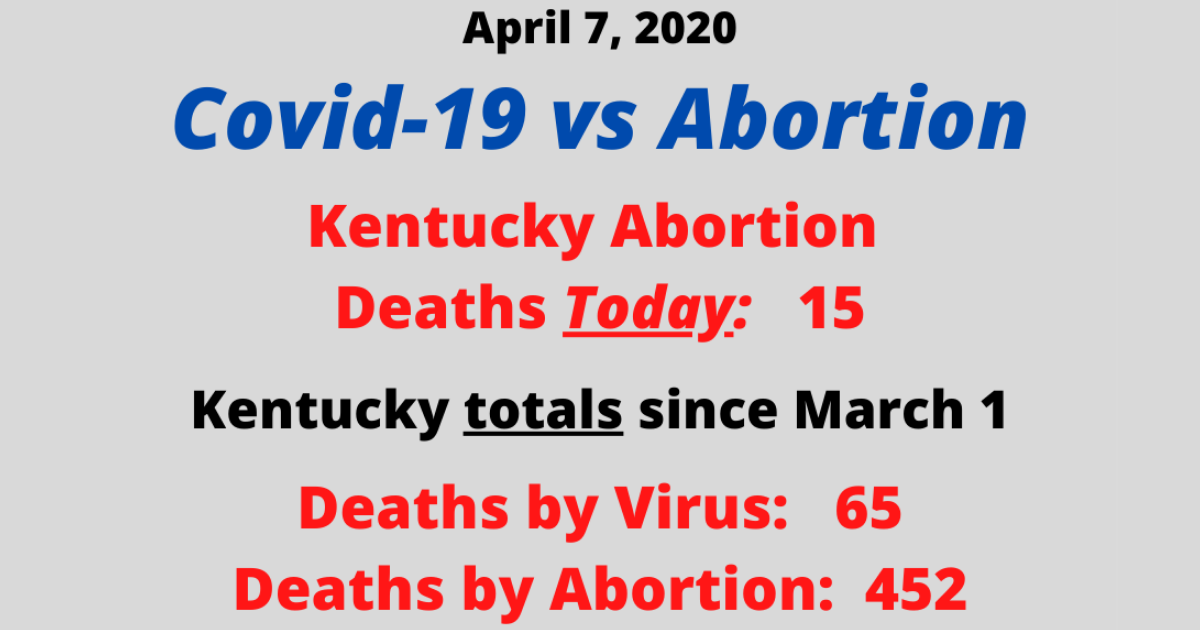 The personal protective equipment that was used to take those 437+ lives could have been used to save one of the 59 Kentuckians who have passed away due to COVID-19.

We simply do not understand why elective, medically-unnecessary abortions have been given such a high priority in the middle of this health crisis. Kentucky is not a pro-abortion state, yet, abortions continue despite widespread opposition.

“Today, I’m calling on CHFS Acting Secretary Eric Friedlander to certify, pursuant to KRS 15.241, that Kentucky’s abortion providers are violating his ban on elective medical procedures during the COVID-19 pandemic by continuing to perform abortions. Kentucky’s current ban on elective medical procedures exists to further the mandated policy of social distancing and to help conserve medical resources for use in fighting COVID-19.”

We have yet to hear a response from Acting Secretary Friedlander about this inquiry.

We encourage Kentuckians who are interested in learning why the Kentucky Cabinet for Health and Family Services continues to allow abortion clinics to openly violate the law to contact Acting Secretary Friedlander.

You may also contact Attorney General Daniel Cameron’s office and let him know that you would like an answer to this inquiry, and that you do not support abortion clinics operating in competition with those fighting COVID-19.