In the midst of numerous legal victories, a cultural marginalization of Christianity and judicial partisanship is exposed. 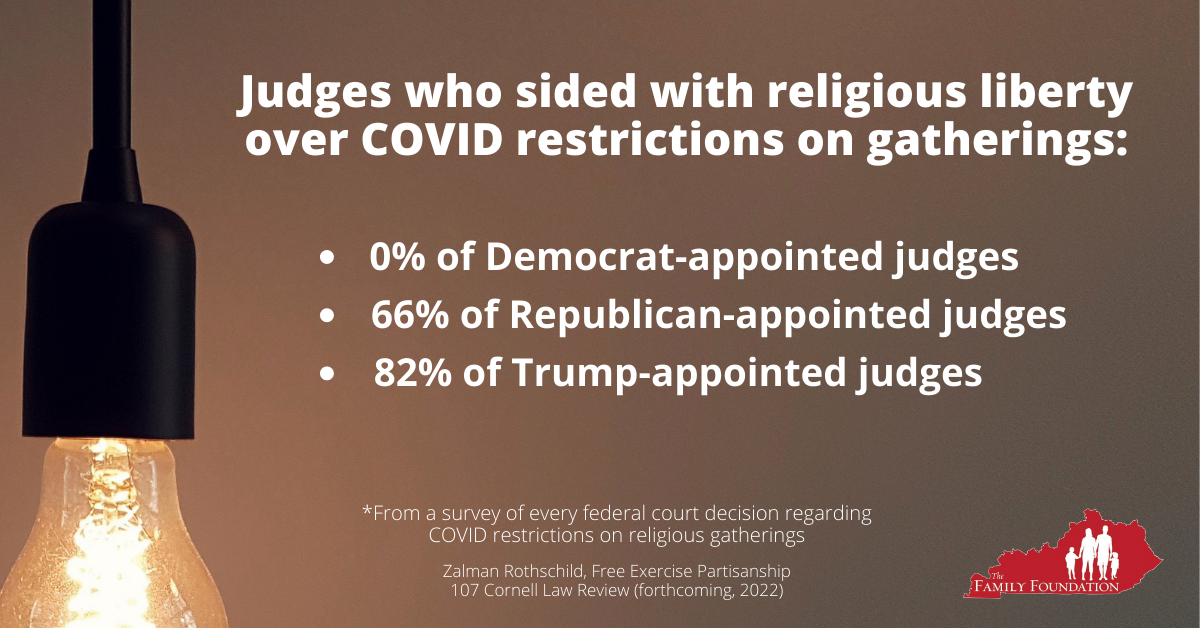 Since President George W. Bush appointed John Roberts as Chief Justice of the U.S. Supreme Court, in September 2005, the Roberts Court has ruled in favor of religious organizations over 81 percent of the time. That’s far more frequently than all previous eras of the Court since 1953, which did so about 50 percent of the time.

These findings were made in The Roberts Court and the Transformation of Constitutional Protections for Religion: A Statistical Portrait, an April 2021 law review article accepted for publication in the Supreme Court Review.

While the authors of the law review article seemingly dismiss the possibility, it is plausible that the shift in the religious winners’ identity to “mainstream Christian” reveals that Christianity has become marginalized in American culture.

The increase in religious liberty court cases involving “mainstream Christians” coincides with a decrease in the number of Americans that identify as Christian, attend church, have any religious affiliation at all. Not to mention the staggeringly small percentage of American adults who have a biblical worldview.

Dr. George Barna’s national survey, released on May 26, 51 percent claim to have a biblical worldview, but only six percent actually do.

According to the numbers, “mainstream Christianity” is certainly a minority in the United States and biblical views on social issues are sure to be marginalized.

As “mainstream Christianity” has become increasingly marginalized, the religious liberty protections recognized by the federal courts have proven essential.

While Christians are thankful that the U.S. Supreme Court has led the way in upholding our nation’s first freedom, a troubling reality has been exposed.

As “mainstream Christianity” loses favor, the protection provided through the courts has become increasingly dependent on who the judge is; or rather who appointed the judge.

According to a forthcoming Cornell Law Review article titled Free Exercise Partisanship, Zalman Rothschild points out that Democrat-appointed judges sided with religious plaintiffs only seven percent of the time in all federal free exercise court cases between January 2016 and December 2020.

As Christianity has lost favor in American culture, it appears that so has religious liberty. But those that adhere to a biblical worldview have the hope of a constitutionally protected space in which to live out their faith and regroup so they can once again win the hearts and minds of their fellow Americans.

The Family Foundation, which publishes the Kentucky Citizen, is one of nearly 40 state family policy councils across the United States that are united in their vision of seeking to see God honored, religious freedom flourishing, and life cherished. It seeks to advance pro-family legislation, mobilize churches on critical issues, and be a voice for pro-family citizens within the Commonwealth.

The organization has been committed to the mission for 30 years and believes a stand for the Lord is needed now more than ever, so that we can return Kentucky to the Biblical principles on which America was founded.