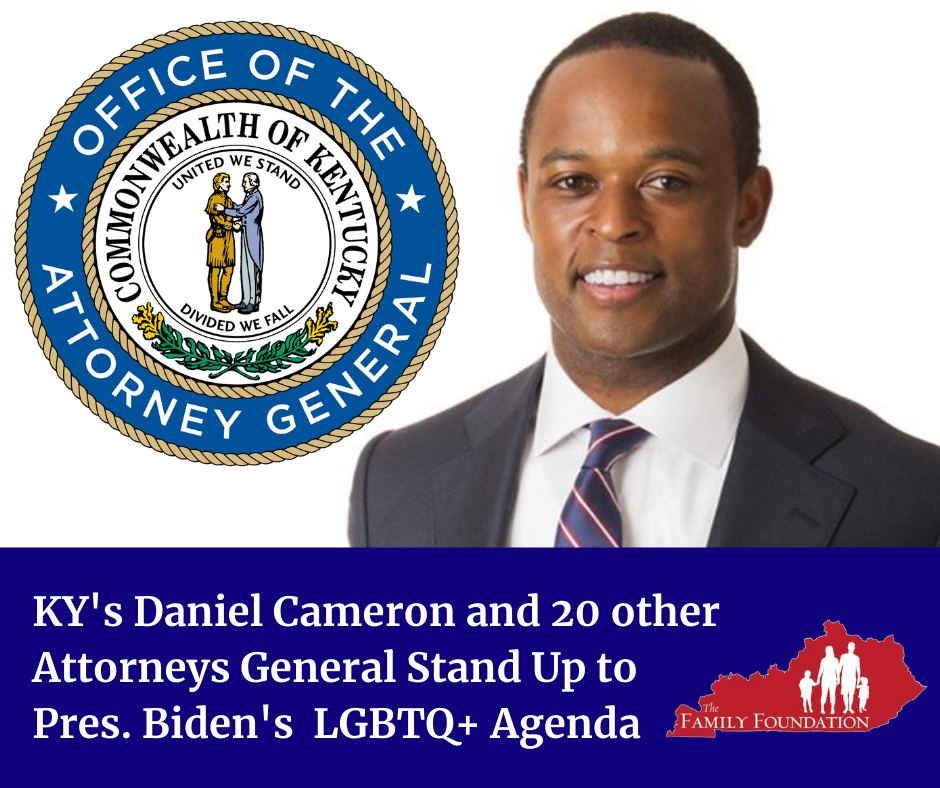 The Biden administration’s Equal Employment Opportunity Commission (EEOC) and Department of Education (ED) have forced the LGBTQ+ agenda upon nearly every employer and educational facility in the nation, including Kentucky. But Kentucky Attorney General Daniel Cameron and others are pushing back.

Under direct orders from Biden, his EEOC declared (on June 15, 2021) that “employers may not deny an employee equal access to a bathroom, locker room, or shower that corresponds to the employee’s gender identity.”

In other words, if an employer has separate bathrooms, locker rooms, or showers for men and women, biological males who identify as female should be allowed to use the women’s facilities.

Regardless of your religious beliefs, Biden would also have you pay tribute to the LGBTQ+ agenda with your speech. After all, “intentionally and repeatedly using the wrong name and pronouns to refer to a transgender employee” could violate the law.

To make matters worse, on June 16, 2021, the ED said it would also reinterpret Title IX to include sexual orientation and gender identity (SOGI). This will have a direct impact on school sports and housing.

The Sixth Circuit Court, which governs the Commonwealth, declared earlier this year that Title IX is a separate issue from Title VII. Kentuckians must push back against the Biden administration’s false narrative with save girls’ sports legislation, as at least eight states have already done.

The Biden administration is attempting to excuse its federal overreach by blatantly misrepresenting the U.S. Supreme Court’s decision in Bostock (2020).

In response, Kentucky’s Attorney General Daniel Cameron and 20 other state attorneys general sent a letter to President Biden on July 7, 2021.

In that letter, they emphasize that the U.S. Supreme Court:

The Biden administration’s “guidance” and “interpretation” is nothing more than thinly veiled LGBTQ+ advocacy, designed to intimidate employers and educators into submission with the party line.

State legislators and the public must join with the state attorneys general to prevent this federal overreach from extinguishing the liberty we cherish.

← Victory at U.S. Supreme Court: 3 Takeaways for Kentucky LET US PRAY: Abortion is Not a Budgeting Tool →